Frugal Hedonism is about recognising that a lot of stuff we spend money on actually makes life less fun in the long run. And that a lot of cheap and free stuff is really fun, so why would we choose the version of fun that means we have to work a lot and feel stressed about bank balances, and get jowly from too much pad thai takeaway eaten on the way home from the job where we were trying to pay off our gym membership and the cost of the car, fancy shirts, and six takeaway coffees per day that we required to make doing that job possible?

As a Frugal Hedonist you look a few gift horses in the mouth and realise they are in need of serious dental work, then you look around for horses with dazzling smiles and sweetly healthy breath like a meadow full of daisies, and you ride those instead.

What the heck are we talking about already? Let’s get example-y.

A Frugal Hedonist might often choose to catch up with friends by taking a long walk while ranting and raving about the week’s thoughts, rather than by buying drinks at a bar. They’ve noticed that the passing scenery adds as much stimulation to the conversation as assessing the merits of the latest craft beer. They likely go to bars too now and again, but the simple act of frequently choosing the walk, means that over time layers of saved money and improved butt-tone add up to make the Frugal Hedonist enjoy other aspects of life more. Like being able to afford to take an extra week of unpaid leave off over the summer, or wearing tight pants. And their friends associate them as much with the sound of birdsong or having seen a cloud in the shape of a gorilla doing push-ups, as with waking up with a blurry head and an empty wallet.

We could go on. But there’s a book that does that. It’s called… The Art of Frugal Hedonism. 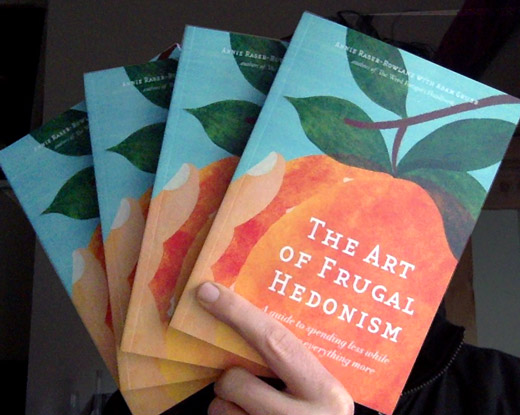 Price includes free postage within Australia.
US readers can order the book here.

Also available in Kindle and ePub formats as an ebook:

Order with our other book

You can buy The Art of Frugal Hedonism with our totally different but strangely complementary book, The Weed Forager's Handbook: A Guide to Edible and Medicinal Weeds in Australia: